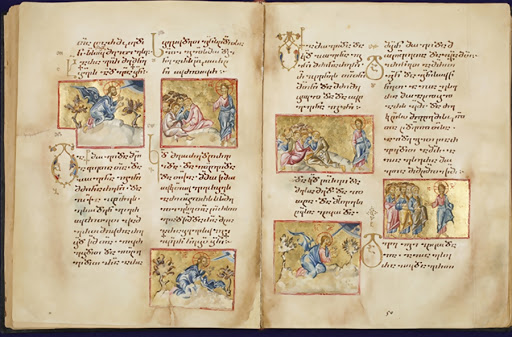 The Georgian language is a member of the Ibero-Caucasian (Kartvelian-Caucasian) family of languages, and its alphabet ანბანი is one of the few unique alphabets in the world.

Historically, the Georgian language was written in three scripts. Asomtavruli – ႠႱႭႫႧႠႥႰႳႪႨ, Khutsuri – ⴌⴓⴑⴞⴓⴐⴈ, and last Mkhedruli – მხედრული with twenty-eight consonants and five vowels, which is the script commonly used at present in printing and handwriting. The Georgian literary tradition dates back to the 5th century.

Since ancient times there were many attempts to place the Georgian language within the familiar language families. Herodotus (5th century BC) tried to relate the Georgian language to the Egyptian language. Others saw its connection with Phoenician or Greek. In the 19th century, scientists sought its roots among the Indo-European languages. This theory was supported by European scientists such as Marie-Félicité Brosset, Franz Bopp, but there were many more who disagreed.

Some sought linguistic proof that Georgian was related to the languages of Asia Minor and Mesopotamia: Hattic, Urartian, Hurrian, Elamian, Sumerian, Pelasgian. Although extinct today, once these languages represented one Mediterranean culture. The only language outside of the Caucasus region that possibly can have a similar origin to Georgian is the Basque language – Euskara.

Data is collected from: www.ice.ge; www.britannica.com

“For someone interested in Georgia, a beautiful and ancient country, or learning its equally beautiful Georgian language, I can't recommend lingua.ge enough. By the time I traveled to Georgia, I was able to communicate with Georgians on a variety of topics and felt a connection to the place - its culture, history, and traditions.”

L. McMahon
"The Georgian language is like a delicious dish that requires a lot of ingredients."

S. Caltekin
“The Georgian verb is an absolute enigma. I love its endless capabilities to produces various unimaginable forms!”

A. Guan
Previous
Next

Subscribe to our newsletter. Once a week, we will send you interesting and useful information about the Georgian language. Be the first to know about our promotions and sales